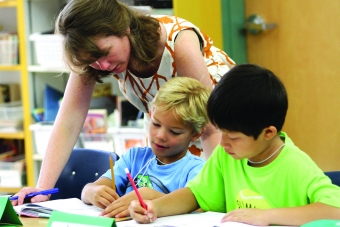 The summer holidays have come to an end and, while youngsters may be refreshed and rejuvenated, many parents up and down the land will be feeling somewhat jaded. Entertaining children during this long break from school can be a daunting, not to mention tiring, task for busy mums and dads.

However, not all boys and girls have had a break from learning. Some youngsters were receiving tutoring at home over the holidays. To help prevent their sons and daughters from slipping back in terms of their learning, parents can arrange special lessons.

One woman who is a fan of continued learning during the summer break is TV presenter and maths boffin Carol Vorderman. The celebrity, who rose to fame thanks to her appearances on popular game show Countdown, has spoken out in favour of summertime maths classes. She said: “What happens during the long six-week break is that if nothing is done, children’s academic skills regress by three to four months. They don’t just stop and pick up where they left off at the end of term. They go backwards. Let’s face it, these summer days can be long and parents often struggle to fill them. It is much better to do maths practice for 20 minutes a day when there is not much else going on than doing homework after a full day at school.”

Many parents seem to agree with Vorderman. For example, speaking to Sky News, mum Kalsoom Hussain from Stoke-on-Trent revealed she is paying for weekly maths lessons for her 12-year-old daughter Mehireen. She said: “Six weeks holiday is quite a long time so I tend to think they’ll go behind in subjects like maths and science.”

However, overdoing it academically over the summer could be a mistake, according to Mary Bousted, the general secretary of the Association of Teachers and Lecturers. Also speaking to Sky News, she stated: “Pupils in the UK and young people have a long academic year, they have quite a long school day and by the time they get to the end of term they’re tired and they need a break. They need a holiday and more than that they need to do different things.

By getting the balance right and using personal tutors as and when this is appropriate, parents stand to boost their children’s learning and development. These days, it is easy for mums and dads to access tutoring like this for their youngsters. As long as they know where to look, they can benefit from professional, high-quality services at competitive prices. Increasingly, parents are heading online to search for the perfect tutors for their children.

Receptionist’s plays and important role for every company

Learn to save money on hiring cars