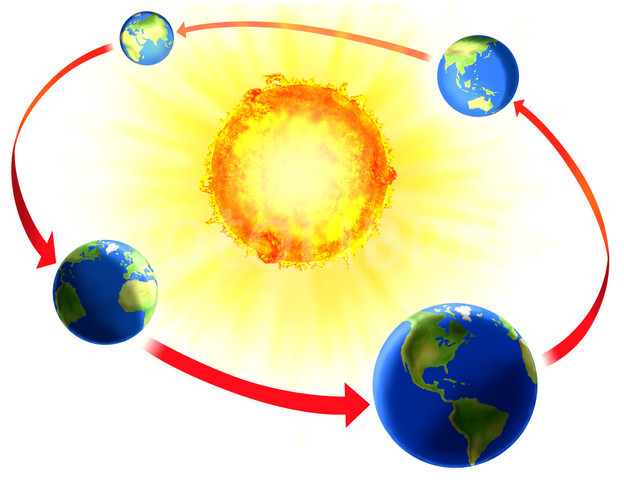 Revolution of the Earth around the Sun

The revolution (or translation) of the Earth around the Sun is the movement that the Earth is around its star the sun. This move follows a kind of “stretched circle”: an ellipse. A complete tour of the circuit lasts 365 days 6 hours 9 minutes (approximately). This movement determines the times of day and night – which vary during the year – and the seasons over most of the Earth’s surface.

The change in the length of day and night inequality

In the sketch below against the right, where the revolution of the Earth is supposed to be seen “from above,” we see the change in the length of day and night to different points on the earth’s surface.

For places in the southern hemisphere, the opposite phenomenon is observed (day length is maximum at the December solstice and lowest in June solstice).

North of the Arctic Circle, a large part of the year there is no light , so no warming . Also during the period when the illumination is, the solar radiation reaching the area, have lost some of their energy entering the atmosphere (some is reflected back into space) and they are pretty low on the horizon (the energy is distributed over a larger area so less heat). The climate is cold all year round. It is called cold zone or polar zone.

By cons, in tropical regions (between the two tropics thus including the equator ), the duration of the illumination little enough varies during the year (between 10 and 14 hours), so these regions are heated constantly. More sunlight are close to vertical and even go through vertically on a few days per year, so their energy is distributed over a very small area that is very heated. These regions are hot throughout the year (seasons are then characterized by the presence or absence of rain ).

In temperate regions (such as those of Europe Western) heat received depends on the inequality of the duration of the illumination during the year and the change of the position of the axis of rotation of the Earth relative to the sun. This double influence determines a hot season (the summer ) and a cold season (the winter ). The seasons are related to changes in temperature (hence the temperate name).